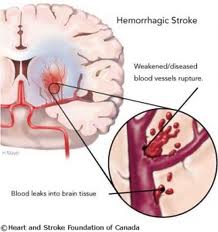 What is a hemorrhagic stroke?

This is when bleeding occurs directly into the brain substance itself. It usually occurs as a result of leakage from small arteries in the brain that have been damaged by chronic hypertension.  Another reason this may happen could be due to the use of certain blood thinners, cerebral amyloidosis or cocaine abuse.

Hemorrhagic stroke is also known as an intracerebral hemorrhage, and it seems to have a predilection for certain sites in the brain, including the thalamus, putamen, cerebellum, and brainstem.  Aside from the areas that are damaged by the bleeding, the surrounding brain can be damaged by pressure produced by the noncompressable blood.  This can be very painful as the pressure in the cranium can rise and cause headaches.

How common is this?

In the United States, there are about 795,000 strokes occuring anually.  Of these, about 10% are hemorrhagic strokes.  In other countries, this may be different.  For example, in the Japanese and Chinese populations, up to 40% of strokes are hemorrhagic.

The incidence of stroke varies depending on age, sex, ethnicity, and socioeconomic status. For example, American Heart Association (AHA) researchers found that black persons had a 3-fold higher  risk ratio of lacunar stroke than white individuals.

What is the usual prognosis?

How is hemorrhagic stroke treated?

The treatment really depends on the cause and the severity as well as the size of the bleeding.  The most important first steps involve basic life support, controling the bleeing, treatning seizures and decreasing the blood pressure and intracranial pressure to prevent a possible herniation of the brain.  Whether or not a surgical approach is used depends on the location and severity of the bleed.

Disclaimer:  The content of this website is produced and made available for informational and educational purposes only and does not constitute, and should not be used as a substitute for, medical advice, diagnosis, or treatment. Patients and other members of the general public should always seek the advice of a physician or other qualified healthcare professional regarding personal health or medical conditions. 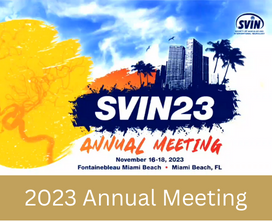